"Take Risks: If you win, you will be happy; if you lose, you will be wise. Nothing ventured, nothing gained."

Eur/Usd
Short trades today. Pulled Fibonacci retracement on 1-hour chart. Channelling between 1H & 15M chart. Looking at momentum I went mid-way taking the ride of the flow - screenshot of 15M below. At the middle bearish bar I went in another position at roughly the same price, making it two positions. 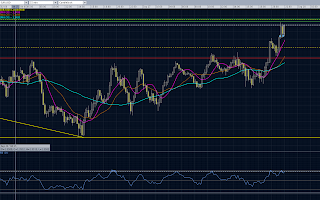 Unzooming to 1H chart. Price looked promising to next resistance fibo for my take-profit. Both positions hit take-profit +37 & +32 pips.

Aud/Usd
Not so smooth this pair. Same set-up. Had a limit order for a better price on support of fibo but also went in mid of fibo, which is a bad practice. Not so strong buying witnessed in Aussie pair.

Unzooming to 1H chart. Didn't wait for take-profit at parity. When US Consumer Confidence data was released, RED, which is worst than forecast, but better than prior month. Price went down to hit my break-even stop-loss. 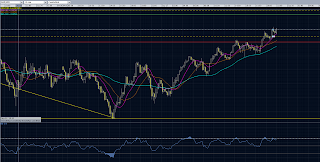 Bought a REITs for holding, comes with quarterly dividends - Mapletree Industrial Trust. REITs are not as volatile as normal shares so holding long term should not have super-high risk and heart attack for me.

Black.
Posted by Black at 10:25 PM No comments:
Labels: Black, Our Journey, Shares, Technical Analysis
Email ThisBlogThis!Share to TwitterShare to FacebookShare to Pinterest

Flopped my Eur/usd trade yesterday. My mistake as mentioned in the previous post was selling at support, when it was clearly not even broken. Great lesson -71 pips.
Sold five units gold trade Xau/Usd at 1,779.64
Closed 1,776.49. So lucky, hit take-profit and then go back up and never returned.

Highlight of the night is Eur/usd trade. It was a beautiful buy limit set right at fibo support (first arrow up). It was hit and then smoothly it rebounced like what the line is made to do. Soon it struggles and then in between in less than 5 minutes, it dips for about 40 pips before candle closes below the fibo support, very near my stop-loss.
I thought with such strong selling momentum things are turning around. I threw my allegiance with "long" position into the dustbin and went "short". In reality, it was the "shorter's" last hooray instead. They quickly die off and price went up towards my original target.. F***. In heat of moment, I throw into 2 more averaging losses to make things worst. The "long" army continue to advance. I felt like a traitor who left his country to assist foreigners but end up dying with them, only to regret at my dying breath.

Break-even night at the end. It's been a while since I traded side-by-side (thru' mobile/msn) with Bottle. Miss those days!

Gold, Eur/Usd, Thanks for Advices

Back in action. It gives me so much adrenaline, although the market is relatively quiet tonight. As a comeback after my major lost on the Aud previously, I placed very small size trading but sticking to my system.
I still prefer meta trader though, now I have switched to an iMac I mainly charted with the web-based Oanda. Using Fibonacci Retracement, Simple Moving Averages for my price making decision. I use what I understand at the moment and do not want to complicate myself.
I love Fibonacci retracement to determine support and resistance, and moving averages to determine the current trend.

Minor downtrend, and I sold Eur/Usd on price breaking support see picture screenshot. Mistake here is price has not exactly broken down below the support dotted line. Price bounce back actually, even at the point of writing.
Right now I am placing risk:reward ratio as my no. 1 priority - to seek 1:2 risk:reward ratio at my every trade and stick to it as closely as possible. I do now know how discipline I will follow. But let's give it a try.
Second trade, sold gold at $1,805.54
Closed $1,789.20
Unable to show the chart as it was traded in mobile platform. Anyway FXDD iPad app is really unrecommended. I wanted to enter Xau/Usd at 1,815 by the time I successfully login after 5 minutes was 1,805. When I was trying to close the trade at 1,784 it has 3-4 errors and it closes at 1,789. Grr...
Side track, we do receive personal emails from readers occasionally. Critiques, advertisements, advices and invitations. We appreciate all of them :) Recently to address Mr G. W. email on advices and views on poker. Although I still think forex news releases are important, even if you don't trade them, they work like a land mine, if major ones, avoid them. But we do went to seminars of successful traders who are our technical traders. So it works for individuals.

I sincerely agree with him on the part on poker heads-up, playing the player instead of the cards. Perhaps this is where I need to change in my mind set. Instead of working on what cards to play in a hand and what raises you should do in what position and playing every player using the same system, we should be adapting to play against every different opponents.

How often when you are focusing on crushing on your opponents, a "nh" or a "friggin' luck box" comment by your opponent affects your match? Admittedly, I think I am affected in some ways. Trash talking does makes me eager to crush my opponent ASAP (only end up messing my focus) but it does not affect me as much as when u meet a gracious friendly opponent (so rare) who gives u a "nh" on a big win. I don't know why I inadvertently go soft (not down there). As the saying goes, "nice guys finish last". And so do I, only at times, and yes I think it sound stupid.
I like the way he put it about eliminating opponents and sending them off without giving a f*** about them. It reminds me of the book I read last year by Donald Trump - Think Big & Kick Ass.
Anyway thank you very much you for highlighting these points.
Good luck to us in charts & tables!
Black.
Posted by Black at 11:29 PM 3 comments:
Labels: Black, Our Journey, Technical Analysis
Email ThisBlogThis!Share to TwitterShare to FacebookShare to Pinterest 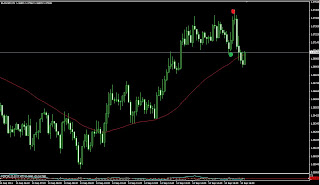 Same routine, i abandoned my desktop and my Final Fantasy 8, power up my laptop... Go for a toilet break and did a last analysing of the market.

Same method used as the previous post on newstrading, 5minutes(as above image) and 1h in uptrend for EUR/USD while downtrend for 4h timeframe. So preferably im looking for bad USD major news result. I WANT TO SEE RED!!!!

Went LONG as shown in image, that big green mole is my entry, red one is my exit. My exit is based on a 4H timeframe Resistance. OOPS i just realize that big green mole-like thing should be higher, at around 1.3710 instead of 1.3704. Sorry im lazy to go edit and post that picture again.. LOL

Im kinda lucky though, my exit was very near its high for that period... Else i would have been stopped out @ breakeven before i can hit my TP.

Lets fly and reach for the stars! Hand in hand, toe with toe, neck by neck bla bla bla bla

Long time no see... yes im alive n still trading, no i didnt give up.. LOL.. Lets get down to business.. Good things must shareee!!!

Was playing my old school Final Fantasy 8, stucked at a quest and realize its 8pm local time... It means news news news...

Abandoned my desktop, power up my laptop n found out that RED news @ 830pm.. Went for a shit, clear my bowel n prepare for glory!!!!

829Pm standing by my laptop, turn down the volume for my Final Fantasy 8.. i can fantasize it later... Lets watch the market... TA DAAAA, EUR/USD downtrend at 1Hr timeframe and results out for 2 USD major news... 1 green 1 red... US Trade Balance = Green and Unemployment = Red.

So the score now is 2 points for USD and 1 point for EUR. USD win... If u r wondering what points im talking about? Let me explain, 1 point for being downtrend in EUR/USD(technical) and 1 point for Green on a major news... That sum up for USD. 1 point for Red in major news, thats for the EUR.

So 2 to 1.. i short on EUR/USD pair, managed to nip in +27pips. Thats Green for me and im a happy man... Not saying that the way i trade with the above method is correct, but i hope it makes u think. Well, if i stayed longer i could have hit about +40pips, but like i said, im not totally confident with this system as well... My settings is like SL20 TP 30 Breakeven 20.(pips)

I shall try more of these, its exciting...

PS : - The above image shows my entry in Green and exit in Red, is just a rough gauge.. Sorry i was lazy to go pinpoint the exact pricing i went in... I just wanna show that it is in downtrend according to technical analyse i've performed.

First night hitting the (online) table after 3 weeks of rest. Took part in a Regional Tourney for a seat to Leisure World Poker Series cruise end of this month, the one I just took part in July. I re-bought once, and during the break time didn't know how to rebuy. I was clicking all over the table including my own avatar until I realized it should be same as cash games.

So I click the dealer chips and saw the add-on button for another 5000 chips and click it but was too late for 0.000001 seconds. So everyone except me and the other guy in a full final table re-bought, and both of us were shortest stack. I was out quickly and couldn't rebuy anymore. Got fucked by Dad for playing poker and he ask me to quit before I get super addicted like my cousin (who had won a few thousand US dollars in cash games & tourneys), who play number of hands a day equivalent to the number of hands I play past one year.

So as all the poker players always face, how can I explain poker is not exactly like the games u play in casinos? I told him its a gambling but it is against other players instead of dealer (who's odds are way up against u). U should noe it is hard to explain that to anyone, in addition to the fact that I haven't been profiting in this poker arena (a question he prompted).

I tilted the moment he screwed me and I haven't even sat down and seen more than 20 hands. Not sure how I shall proceed from here, oh well let's see.

Black.
Posted by Black at 10:22 PM No comments:
Labels: Black, Poker
Email ThisBlogThis!Share to TwitterShare to FacebookShare to Pinterest